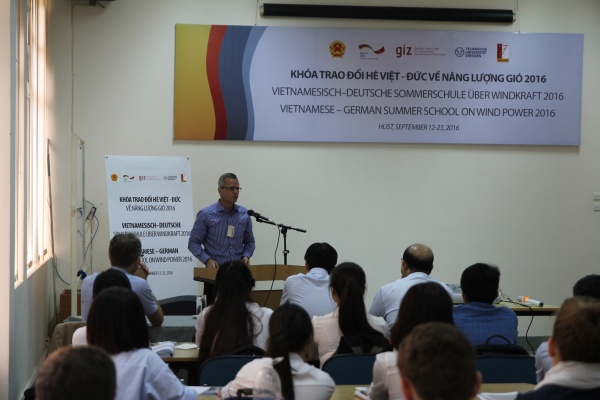 Hanoi, 12 September 2016 – Today, The Deutsche Gesellschaft fuer Internationale Zusammenarbeit (GIZ) GmbH in Vietnam, in collaboration with the Technical University of Dresden (TU Dresden) and Hanoi University of Science and Technology opens the Vietnamese-German Summer School on Wind Power which will be organized in two weeks from 12th to 23rd September 2016 at the Hanoi University of Science and Technology (HUST). The School is facilitated by the MOIT/GIZ Energy Support Programme under the Technical Development Cooperation project “Suport to the Up-scaling of Wind Power” (Wind DKTI) which aims to kick-start the wind power sector in Vietnam via three major action areas (i) Legal and regulatory frameworks; (ii) Capacity Development; and (iii) Technology Cooperation. The project is commissioned by the Federal Ministry of Economic Development and Cooperation (BMZ) under the German Climate Technology Initiative (DKTI) and jointly implemented by GIZ and the General Directorate of Energy (GDE), Ministry of Industry and Trade (MOIT).

The Vietnamese-German Summer School on Wind Power falls under the framework of Technology Cooperation action area which aims to facilitate knowledge transfer between Viet Nam and Germany, and stimulate research and innovation on wind power in Viet Nam through research collaborations, student summer schools and private sector partnerships. With the aim to increasing awareness and interests in the wind power sector of young labour force in Viet Nam, the School targets last year bachelor and master students of diverse background from Viet Nam and Germany. The course is delivered by experienced lecturers from HUST and Technical University of Dresden (TU Dresden) as well as a guest speaker from GIZ Energy Support Programme in Vietnam.  The course is expected to provide the students with a comprehensive knowledge of power system and wind energy with a focus on wind project development. Topics covered include: fundamentals of power systems, the characteristics of the wind energy, liberalized electricity market with penetration of wind energy, wind farm design and wind project development, wind resource assessment and wind turbine design and much more. Additionally, the students also have an opportunity to work in interdisciplinary and intercultural teams which will help them significantly improve their networking as well as team work skills.

In keeping with Viet Nam’s increasing demand for power as a result of industrialization process, the government has encouraged the investment into renewable energy in which wind energy with its huge potential plays a significant role in contributing to future electricity generation. According to the revised Power Development Plan (PDP) VII, the installed capacity of wind power shall be raised to 800 MW by 2020 and 6,000 MW by 2030. Estimations from an existing 2011 wind atlas cite around 24 GW of potential. Despite the promising wind resource, only 114 MW of wind power are operational due to a number of regulatory and market barriers as well as capacity needs that need to be overcome.